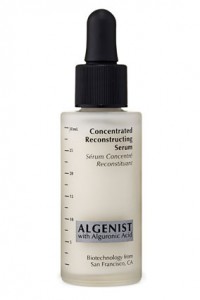 What is it? An exciting, scientifically researched, anti-aging range from the USA based on algae and with some remarkable results and reviews.

What’s the USP? OK – here comes the science bit – Algenist began when its two founders, scientists Jonathan Wolfson and Harrison Dillon began working with algae and founded their company Solazyme with an ambitious mission to produce renewable oils as replacements and enhancements to all major sources of oil on the planet from petroleum to animal and plant based oil. However during their research Solazyme’s biotechnology scientists unexpectedly discovered Alguronic Acid, a patented compound responsible for regenerating and protecting the microalgae cell. Surprisingly during testing of Alguronic Acid they found it had significant anti-aging properties, ie increasing elastin synthesis by up to 32% and cellular regeneration by up to 55%. Further research resulted in successfully isolating and extracting Microalgae Oil, a rich source of oleic acid and phytosterols containing tocopherol and tocotrienols which help restore the skin’s natural lipid barrier function. In vitro clinical tests also revealed the Microalgae Oil’s ability to increase cell repair by 42% and decrease the rate of cell damage by 31%.

Hero product?  The Concentrated Reconstructing Serum (£72, spacenk.com)  formulated with the highest concentration of Alguronic Acid in the range. It’s an oil-free serum that rebuilds the look of skin firmness while visibly restoring skin elasticity and boosting radiance. The formulation – which combines Alguronic Acid with a vitamin, peptide and antioxidant complex – is clinically proven to reduce the number of deep wrinkles by 32% in just 10 days.

Why the name? Algenist means the Genius of Algae.

I’d try…  The new Advanced Anti-Aging Repairing Oil (£65) – launching this month in the UK – is the first product formulated with the patent-pending Microalgae Oil. Fast absorbing and non-greasy, it instantly replenishes the skin with essential moisture while working to repair the appearance of fine lines and wrinkles. Microalgae Oil is combined with ceramides and a brown algae extract to visibly restore elasticity and leave skin looking firmer, more supple and absolutely radiant.