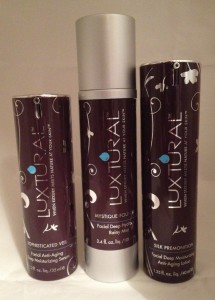 What is it?  Premium, natural anti-ageing skincare with a celebrity following that includes Scarlett Johansson and Simon Cowell.

What’s the USP? The way that it unites a whole bunch of skincare philosophies (luxury, organic, natural, holistic, scientific and spa). The USP-ingredient is pure Pacific Ocean rainwater (yes, really –  collected out at sea, well away from the sort of pollution you might find in rainwater over a big city). Why? because it’s low in minerals, and helps the products to deliver deep hydration to the skin.

Why the name? It gets across the blending of luxury and natural just nicely.

How new is it? Launched in the USA in 2009, and has just arrived over here.

I was a bit surprised…  given the brand’s emphasis on green-and-natural-ness, by how very silicone-slippery the serum feels and to see that the two first ingredients on the INCI list [where ingredients are listed in order according to the volume of them that’s used, the biggest ones first], are cyclopentasiloxane (silicone) and dimethicone crosspolymer (another silicone). In fact  the fourth ingredient is yet another silicone (the third is vitamin E). No wonder it feels so very silky on the skin. Nothing wrong with silicone – plenty of people blame it for ‘coating’ the skin and causing  breakouts though no scientific studies have ever proved this —  and it’s known to be good for helping skin hold onto moisture, though it’s not usually popular with the ‘naturals’ brigade. There are also nigh-on 50 other ingredients, including extracts of orchid, pomegranate, passionfruit, seabuckthorn and rose of Jericho, along with seaweed, peptides, ceramides and moisture-capturing hyaluronic acid.  And it clearly works – independent clinical trials found that the product raised skin hydration levels significantly, and enabled skin to hold on to that increased hydration level for at least six hours.