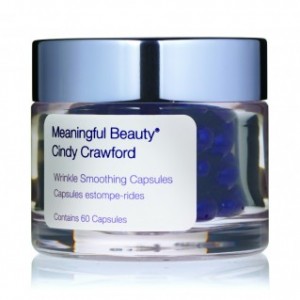 What is it?  It’s a skincare range by the ever-youthful, ever-gorgeous Cindy Crawford.

What’s the USP? Who doesn’t want to know Cindy’s secrets? At nearly 50 she’s barely changed over the years and represents a natural and healthy beauty, she’s never subscribed to the size zero fad. Cindy says she owes her fabulous complexion to the French anti-ageing guru, Dr Jean-Louis Sebagh who has looked after her for over seventeen years, and now she has joined with him to produce her range, which is based on breakthrough anti-ageing treatments that Dr Sebagh uses exclusively on his patients. At the heart of each treatment is a rare melon from the South of France which has a unique ability to remain moist and fresh. The formulation contains an exclusive microencapsulated melon complex; other key actives include the antioxidant superoxide dismutase, conenzyme Q10 and key minerals.

Hero product? Meaningful Beauty Wrinkle Smoothing Capsules (£29.99, as part of the introductory kit package, at meaningfulbeauty.co.uk) a powerful punch of anti-ageing anti-oxidants in a capsule and which works well as a primer under makeup. Makes skin smoother, firmer and plumper while reducing fine lines and wrinkles particularly around the mouth, eyes and forehead.

How new is it? Not very new — the range launched in 2005, but it has had a major overhaul and re-formulation, hence the all-singing all-dancing re-launch just now.