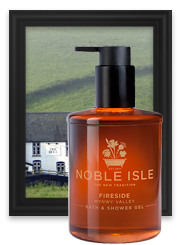 What is it?  Fine toiletries

What’s the USP? The quintessentially English ingredients, sourced from locations throughout the British Isles...

Hero product? …which means fab products like the Perry Pear Shampoo and Conditioner (£18/£20), the pear extract sourced from a 200-year-old Yellow Huffcap Perry Pear tree in Gloucestershire, and Summer Rising Bath & Shower Gel (£20), which contains gooseberry and elderflower sourced from the Lost Gardens of Heligan in Cornwall, or indeed the Fireside  – shower Gel, £20, above, or Candle (£39),  all at nobleisle.com

Why the name? Because it’s British and proud of it. ‘This Nobill Isle, callit Gret Britanee’, declared James III of Scots while negotiating the marriage of his son to Cecily of England in 1474 – which was the first recorded use of the term ‘Great Britain’. (And no, I’m not that learned, I nicked this gem off their website).

I’d try… The shower gels, or maybe a gift set to get you going.