Shellac While You Cycle, Ma’am?

Back in the days when Londoners started to look more presentable – a dozen years ago, maybe? – I used to loved writing stories on high-speed grooming that involved, say, having a blow-dry, a manicure and a pedicure all at the same time and within half an hour. It was a bit like going through a beauty-car-wash, but heck, it was effective, swift and looks-enhancing.

That sort of thing sounds passé now, but until today I had never tried (or, let’s be frank, even dreamed of) combining a Shellac manicure with a slimming treatment. But yes, such a beauty/anti-cellulite combo does indeed exist thanks to the ingenuity of Dajana Prosnanova who runs the Knightsbridge Hypoxi studio in Beauchamp Place.

Hypoxi is one of those odd… treatment systems that sounds so unlikely that most people simply dismiss it out of hand. It involves pedalling, not too fast, on a static bicycle with your lower body enclosed in a vacuum chamber (see what I mean?). The idea is that the reduced pressure of the vacuum encourages blood to flow closer to the surface of the skin, and this improved circulation helps flush away the fat beneath the surface, which is being broken down by the exercise. It sounds bonkers but Dajana’s regulars love it and flock in at this time of year in preparation for showing off their bodies on yachts, etc, and I know from doing a course of the treatments a few years ago that it is effective, albeit time-consuming.

How to while away the time while pedalling, wondered Dajana? Or indeed, the time half her clientele spends lying trussed up in a kind of space suit with tubes which subject them to pulses of vacuum compression (this ‘HD-PressureSuit is the other part of the Hypoxi experience, which I’m told is good for lymph drainage and blood circulation and firms up the skin while dispersing toxins). What about a manicure? To this end she has joined forces with Perfect 10, a mobile beauty company whose girls are dab hands at administering long-lasting Shellac manicures (the sort that are painted on like a normal varnish, then set under a UV light, and last, shiny as new, for weeks) even while clients are hard at it on the bicycle. 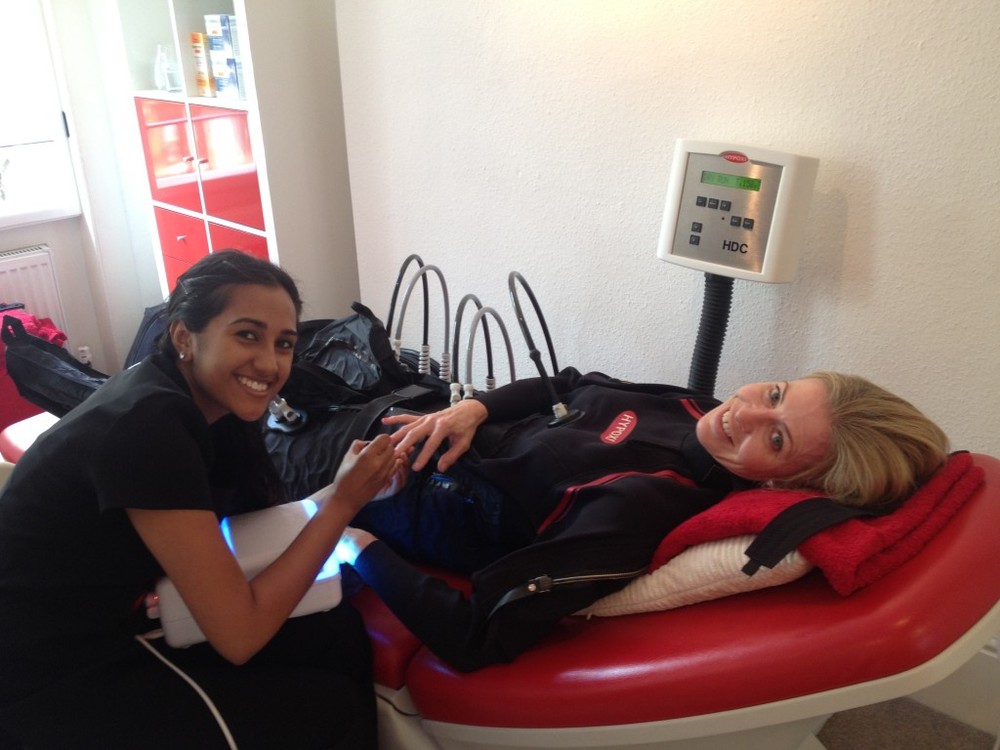 In the interests of research, I felt it necessary to submit to the new combination, and had my nails done while lying in the pulsing bear-hug of the HD-PressureSuit and gazing out of the third-floor window at the waving treetops of Knightsbridge, which has to be one of the most bizarre experiences of the year to date. And apart from the fact that I was lying there like Lady Muck and being squeezed reassuringly firmly, with the UV nail-curing light balanced awkwardly on my tummy, it was just like any manicure. I did do the cycling bit afterwards, too, but the mani was done by then, so I had plenty of time to admire my nails as I pedalled away. One session wasn’t really enough to make a noticeable change to my body, but my skin felt nice and firm, and my nails are lovely and shiny – so a lunch-time well spent. And it has set me thinking. There aren’t a huge number of beauty/ exercise combos that would work so well (waxing during pilates, say) but wouldn’t it be great to have a pedicure while you’re stuck in the dental hygienist’s chair?