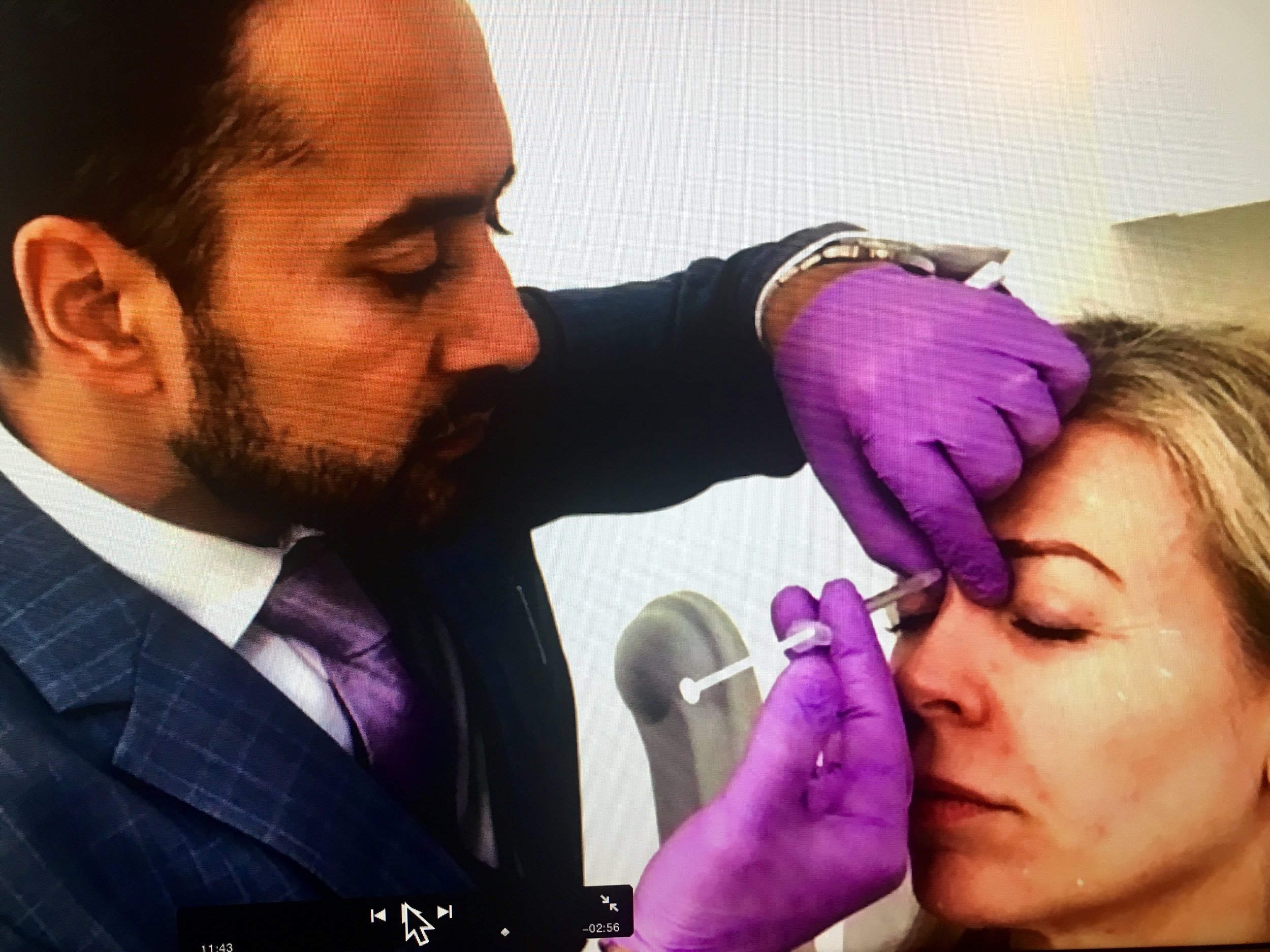 Having Botox shots between the eyebrows with Dr Tapan Patel

In a couple of days’ time there’s an anniversary that you’re probably happily unaware of – I certainly was until I was asked to write an article about it. It’s 15 years since Botox received approval from the American FDA (the Food and Drug Administration) for cosmetic use.

So for this article I have written about why that approval was such a big deal and – confession time – about my experiences with Botox over the years.  Yes, I have had quite a lot of it and yes I know my face is fairly wrinkly at the moment but that’s because I haven’t had any for a while except for half-a-forehead-full about six weeks ago (and yes, only half-a-forehead-full, that was for a different article. Goodness. The things I do for work. , I’ll put the link in in case you’re interested).

If you are thinking, hang on, hasn’t Botox been around for a lot longer than 15 years? Well, you’re absolutely right. It’s a prescription drug and it was used in the 1980s to correct squinting and eyelid spasms – because how it works is that it temporarily stops muscles being able to contract (or go into spasm).

So by the 1990s doctors and dermatologists were experimenting with how it might work to damp down the muscles in the face that make wrinkles – the muscles that lift the brow into furrows, the muscles around the eye that scrunch the skin up into crows feet lines and particularly the muscles that draw the eyebrows together to give vertical frown lines

My first encounters with Botox

I started hearing whispers about Botox when I started writing about beauty in the late 1990s  – it was all rather hush-hush, not that many doctors were using it and it’s hard to remember now, but almost everyone was completely horrified by the idea that vain women were resorting to injections of what the papers liked to call a ‘deadly poison’ in order to stave off the ageing process – and were often ending up with strangely frozen, waxy-looking faces as a result. Because early Botox wasn’t subtle. I was talking to Dr Tracy Mountford about this recently – she was one of the first cosmetic doctors in the UK to use Botox – and  she pointed out that in the early days the protocols were all about using heavy doses to achieve total smoothness. It was all about ‘chasing the line’ – or chasing away the lines.

Back then, it seemed so scary

And people were really alarmed by it because Botox is made from botulinum toxin A – and botulinum is the most lethal toxin there is. It’s a nerve poison. But as with any substance, what makes it poisonous is the dose and the amounts of toxin in Botox are minute. So cosmetic doses of Botox are not going to poison you. If I tell you that botulinum toxin A has also been used – for decades – to reduce muscle spasms in children with cerebral palsy, and it takes around 10 times the quantity that you would have in a cosmetic dose to stop a child’s limb from spasming, that might put it into context.

But the early adopters loved it from the start

But back to faces. By the turn of the century, I was a bit baffled by Botox because public opinion was hugely against it and very fearful – but at the same time I was interviewing doctors who were using it every day and their delighted patients who couldn’t get enough of the stuff and who clearly didn’t have any problem with it. Here’s a piece from the Evening Standard which I wrote with a colleague in August 2000 (see below), with a quote from one woman saying how she would rather miss a dentist’s appointment than her Botox jab. Possibly the wrong thing to compare it to since a lot of us wouldn’t mind skipping a visit to the dentist, but you get the point. 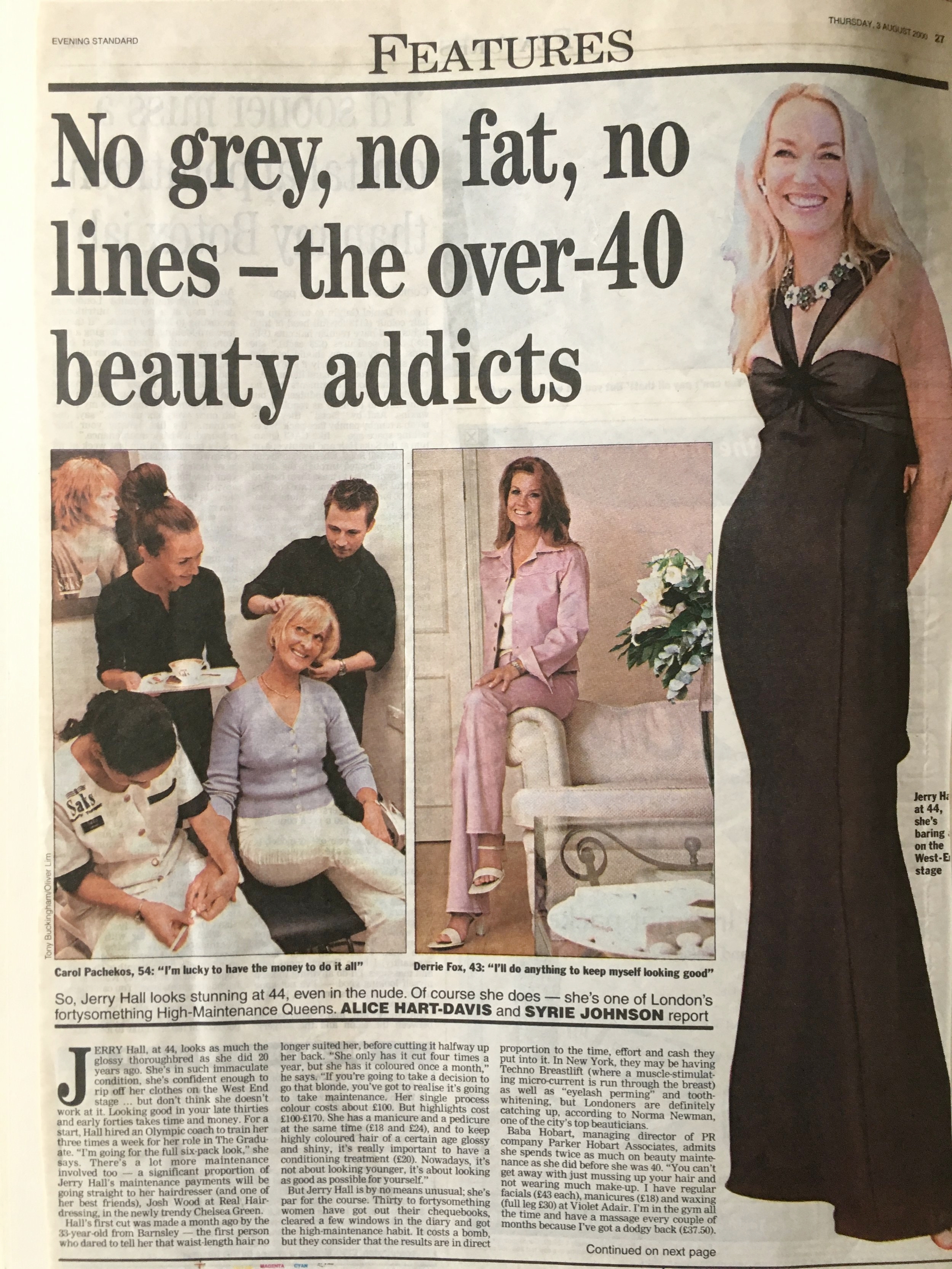 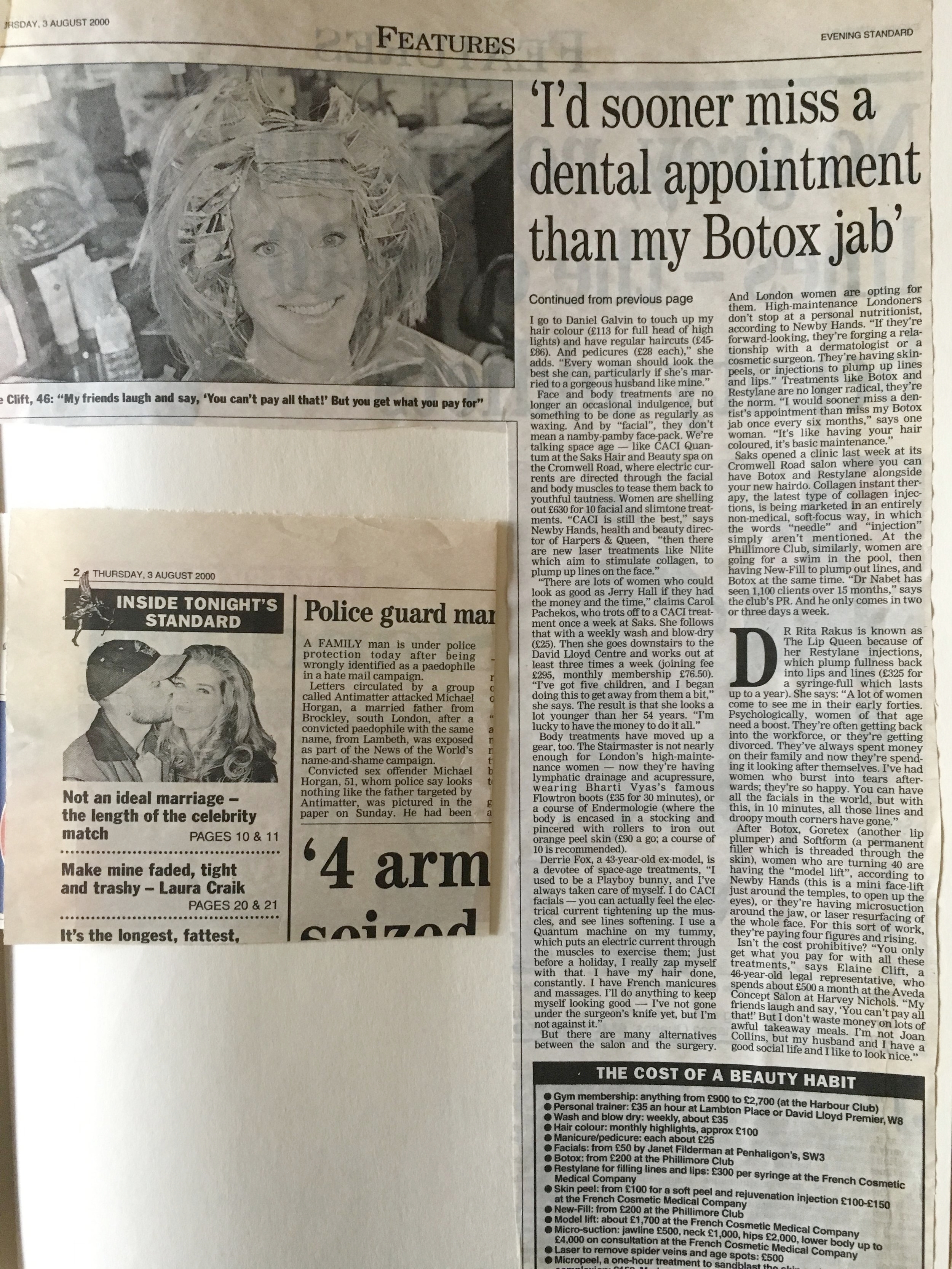 When the FDA approved Botox, it was a very big deal – because it was the first time a prescription medicine had been approved for a cosmetic use and while FDA rulings don’t govern UK doctors, this one made the whole thing seem much more official, much more ‘OK’.

I didn’t get round to trying Botox until 2004 by which time I certainly needed it – I was 41 then –  and I went to a doctor recommended by a friend. It wasn’t a great success because he whacked several large doses straight across the middle of my forehead – and these big red marks swelled up… and I  was on my way into the office and had forgotten my make-up bag so I had to dodge into the nearest shop that sold make-up to use their testers to cover up the damage. And then when it did settle in, it just left me with a completely blank forehead and I couldn’t stand it and ended up having a fringe cut to hide it. So that wasn’t brilliant.

But I was constantly talking to doctors and dermatologists and surgeons who were using Botox and they were always offering to treat my face, and every now and then I would say, “Ok then, go on, show me what you can do,’.

Sometimes it was great, and I’d look fresher and more rested. I always love the way it smoothes away all the stress and tension from my face – but then I hate it if I can’t move my face at all and certainly, even 10 years ago, it was quite hard to find someone who could find that happy medium where you look fresher but you don’t look fake. 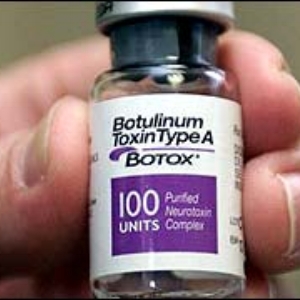 Each vial of Botox is tiny. Image from ConsultingRoom.com

Now Botox has come of age

But now, you could say that Botox has come of age and although there are still a lot of doctors doing bizarre and over-enthusiastic work with it, the great majority all aim to give people a ‘natural’ look with minimal doses, just to relax those muscles that cause the dynamic wrinkle lines rather than ‘freeze’ them. And they all know how to use botox to balance up a face, too if, say, you have one eyebrow higher than the other.

Or if like me you tend to pull down the corners of your mouth a lot, a couple of shots into the muscles in the sides of the chin will reduce that, or if you grind your teeth, Botox in the masseter muscles in the jaw can soften that, and also makes the jawline a bit less square (and yes, over the years, I’ve tried all these things. Along with Botox in the neck because if your neck is looking stringy and over-tight, softening the muscles eases that.

So i have had a lot of Botox over time but the two great things about it are that (a) – it works  and (b) it is temporary. The effects wear off over 2-6 months, depending on how much you had injected and how strong the muscles where it was injected are.

I like to let it wear off before I go and have more, just to remind myself what I look like without it, and also because I know, as with fillers and lasers and all the other cosmetic procedures, it can be a slippery slope, and it’s not hard to end up looking a bit too ‘done’.

Because I am writing more than ever about non-surgical procedures like Botox, I am always bumping into the doctors and surgeons and dermatologists who use it – interviewing them at their clinics, or meeting them at industry conferences (where you see a lot of very weird faces). And they all say that what everyone wants is to look natural and normal – and they (the doctors) have got so good at it that with most of their clients, you really can’t tell that they’ve had treatment.

The trouble is, that means all the famous clients can get away with fibbing and saying ‘No, I’d never have Botox, I tried it once and it made me look weird, so I stopped…’. Which is really unhelpful for normal mortals wondering how these A-listers look so effortlessly fab.

So I say all this to the doctors, and ask if they have stopped giving so many Botox treatments, because if everyone who claims they’ve give it up had really given it up, well, the doctors would be out of business. And the doctors laugh and remind me that Botox and filler  are their top two treatments.  There is no backlash. All those people, particularly celebs, who swear they’ve given up on Botox? They’re just getting such good, subtle work it’s very hard to spot. They’re getting what Dr Sebagh, who is one of the best-known names in this whole field calls ‘actor Botox’ – where his patients can make all the expressions they need to – just not so exaggerated.

Where do I have Botox now?

So what do I have done now? For the past year or so I’ve been seeing Dr Tapan Patel at the Phi Clinic who is brilliant and who always errs on the side of caution. He sprinkles a bit of Botox around my face as and where it’s needed  – . And I always go back two weeks later so he can see how it’s settling and make adjustments if necessary.

I’ll add the video in here of me having the treatment with him, from a few months ago, if you want to see what the process looks like – and I know the big question for anyone who is interested in Botox is: who should I go and see? The best answer is, someone you have a personal recommendation for. Or someone who is registered with the BCAM. I’ll  put below a list of the doctors who’ve given me great Botox over the years and others who I know do great work. It’s only the tip of the iceberg, there are so many practitioners, but I hope it’s helpful.

The link to the article in the Mail is here. How I wish they had seen fit to use more serious headline, but I hear it was a direct request from the editor. And maybe that they had used a picture where I didn’t look like an android. But that’s the nature of the game.

Doctors, derms and surgeons who have done great Botox for me include:

Dr Tapan Patel and his associates at the Phi Clinic, 102 Harley Street, W1

British College of Aesthetic Medicine – link here. This used to be called the British Association of Cosmetic Doctors and all members must be registered with the GMC and meet certain criteria and continue their aesthetic training, so it’s a good place to look for a practitioner.