FOREO ‘ISSA’ TOOTHBRUSH: so how well does it work? 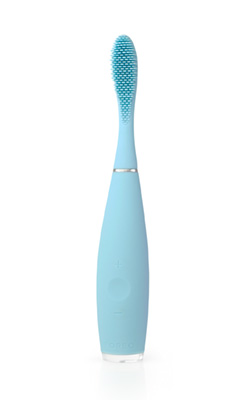 I was really intrigued when the gorgeous Issa toothbrush launched last autumn. It’s expensive (£149) and impressively high-tech — it’s the world’s first electric toothbrush to be made completely from silicone and claims that using it for two minutes morning and night will leave your teeth looking whiter and brighter while a gentle gum-massage function will lead to healthier-looking gums.

The product comes from Swedish company Foreo, which has also launched an innovative face-cleaning device (it’s not exactly a brush, but it’s the same idea as high-tech face-cleansing brushes) which also has silicone bristles, which I love and know to be very effective. So I was very keen to see how the toothbrush performed.

This beautiful space age toothbrush feels as peculiar as it looks, with its soft, silicone ‘bristles’ and the vibrating sensation that its ‘sonic’ pulses create inside your mouth. Bacteria doesn’t breed on the silicone, so you only need to change the brush head once a year and the battery only needs charging every couple of months.  It sounded like a winner and claims that using it for two minutes morning and night will have your teeth looking whiter and brighter in a couple of weeks. It feels soft in the mouth, very different from bristles, though strange because the pulsing vibrations feel as if they’re going the whole way through my head. I’m not at all sure that the bristles are effective at getting into the crevices between my teeth, but my teeth feel squeaky-clean after each brushing.

I showed it to my dentist, Dr Jasmin Piran at London Smiling, who looked intrigued. ‘Why don’t you use it for a couple of months until your next hygiene appointment,’ she suggested, ‘then we’ll see how it performs.’ So I did, abandoning my usual brush (a Philips Sonicare one that I have become very fond of over the past couple of years). But when it came to my follow-up appointment Claire, the new hygienist, inspected my mouth, looked at my records then paused before asking whether I had been doing anything differently since my last appointment.

I told her, expecting congratulations, but instead she told me that my ‘plaque score’ – how much plaque there is sitting on my teeth, which is usually a respectably low 9-15 per cent — had leaped to an unimpressive 27 per cent. Eek.

I can see that it may be my brushing technique that is at fault here, and maybe I need to learn to work this brush in a different way, but such a deterioration in such a short time, when I have still been brushing for two minutes twice a day, and flossing as usual, alarmed me. I’ve gone back to my normal toothbrush.