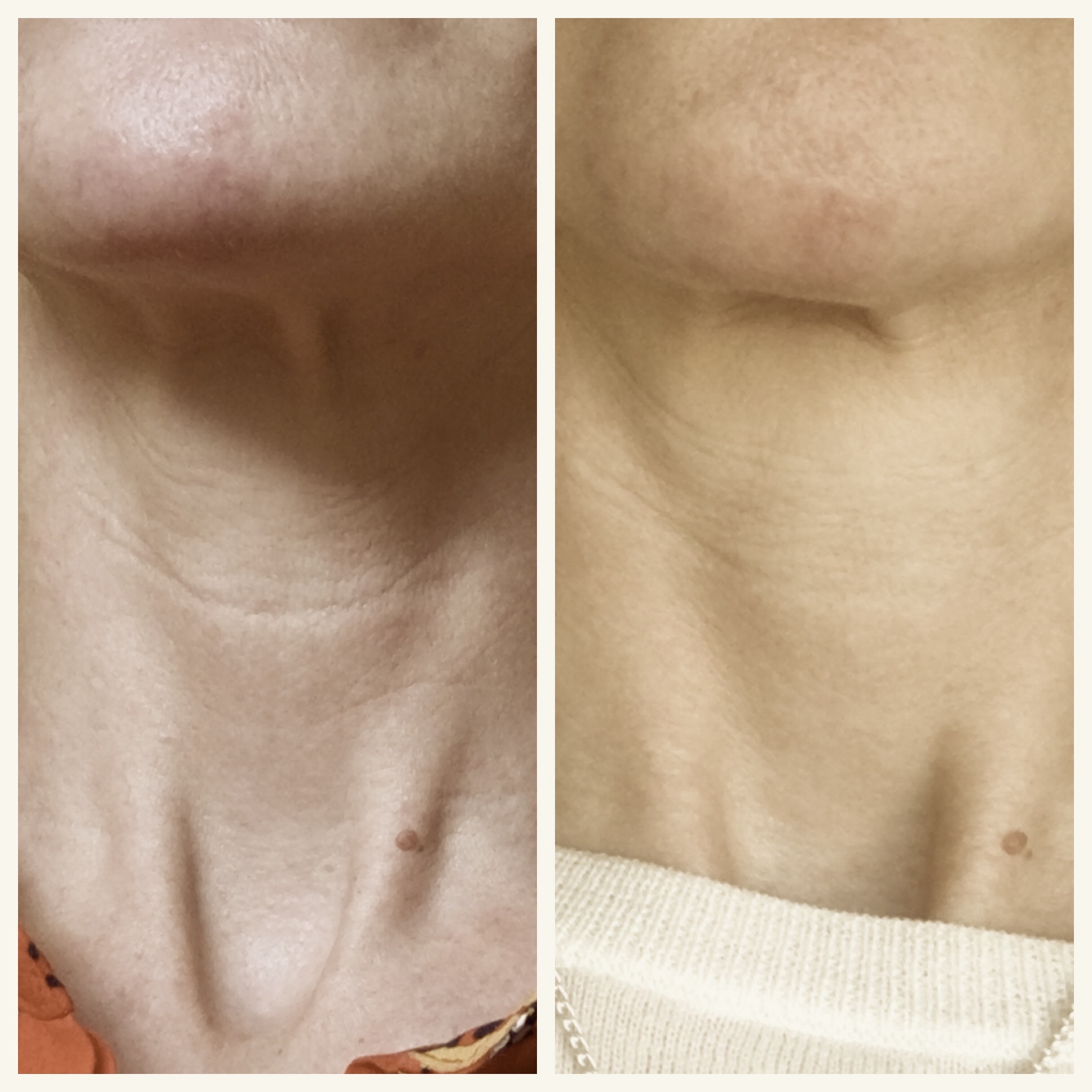 My neck before (left) and after treatment. The light’s not the same, but you can see the change

Softening neck wrinkles from the inside out sounds like science fiction, but that’s what I’ve had done here, with the latest ‘moisture jab’ injections. There’s hasn’t been much that you can do for a crepey neck – apart from choose a good neck cream, or just cover it up — but now a new bunch of injectable, moisturising hyaluronic acid gel treatments is offering a whole new approach.

What are these ‘moisture jabs’

There is Juvederm’s Volite, Restylane’s Skin Boosters  – and Profhilo, which I chose because you only need to have two rounds of five injections on either side of the neck. The other treatments require hundreds of tiny pinprick injections (the Juvederm one is a one-off treatment, but the Restylane one requires three rounds of treatment to get the full result). Profhilo is also proven to boost not just skin hydration and elasticity but to fire up collagen production, too, which means firmer skin after about eight weeks — it takes that long for the skin to remodel itself, especially if it’s on the mature side. 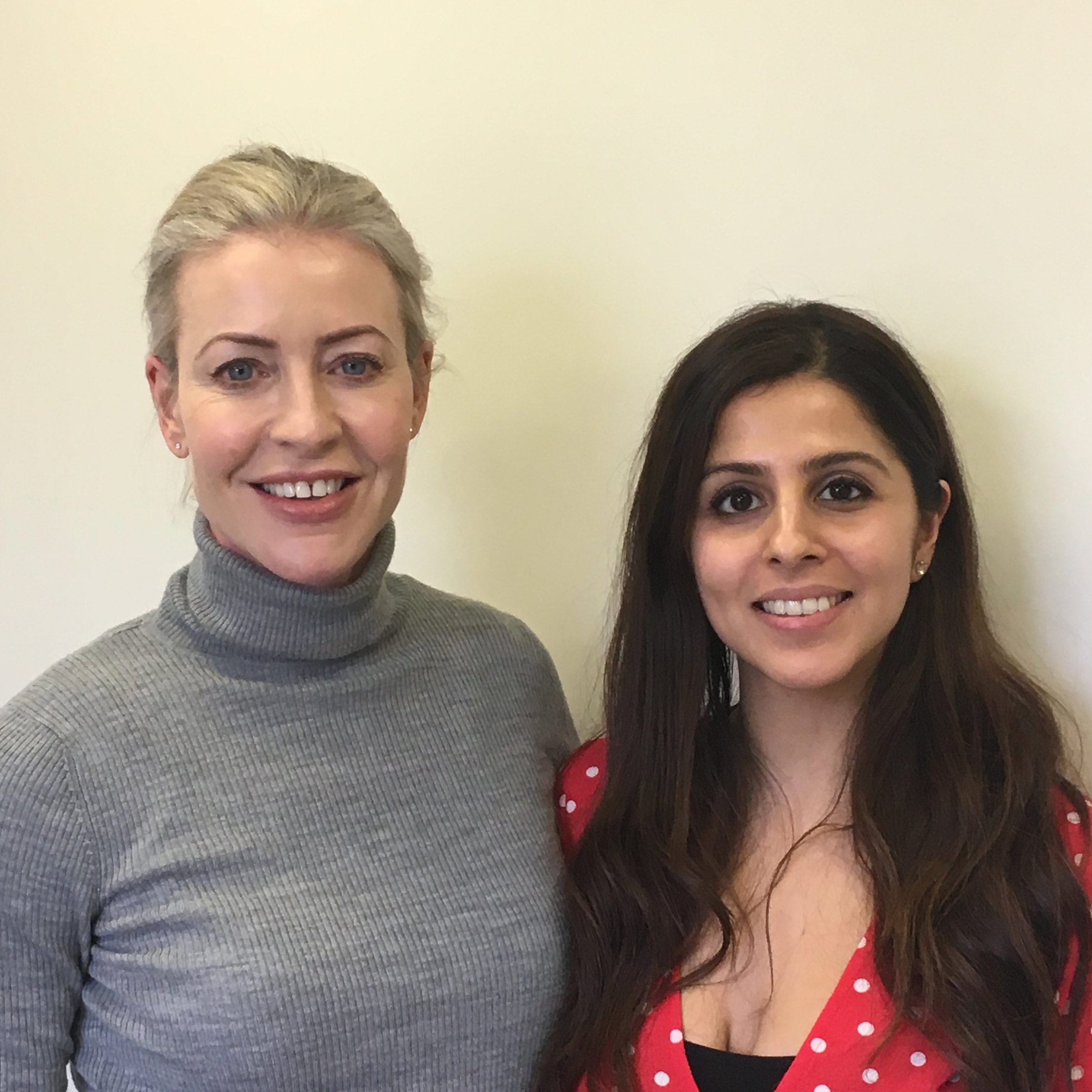 I had my treatment done at the Waterhouse Young clinic in London with Dr Saira Vasdev, Before she got onto the Profhilo jabs, she injected 2ml of Aliaxin’s Shape and Restore,  a soft and flexible type of dermal filler directly along the ‘necklace lines’  creases in my neck to give these some added support. Together with the Profhilo, it has an overlapping effect at kickstarting the skin into action. 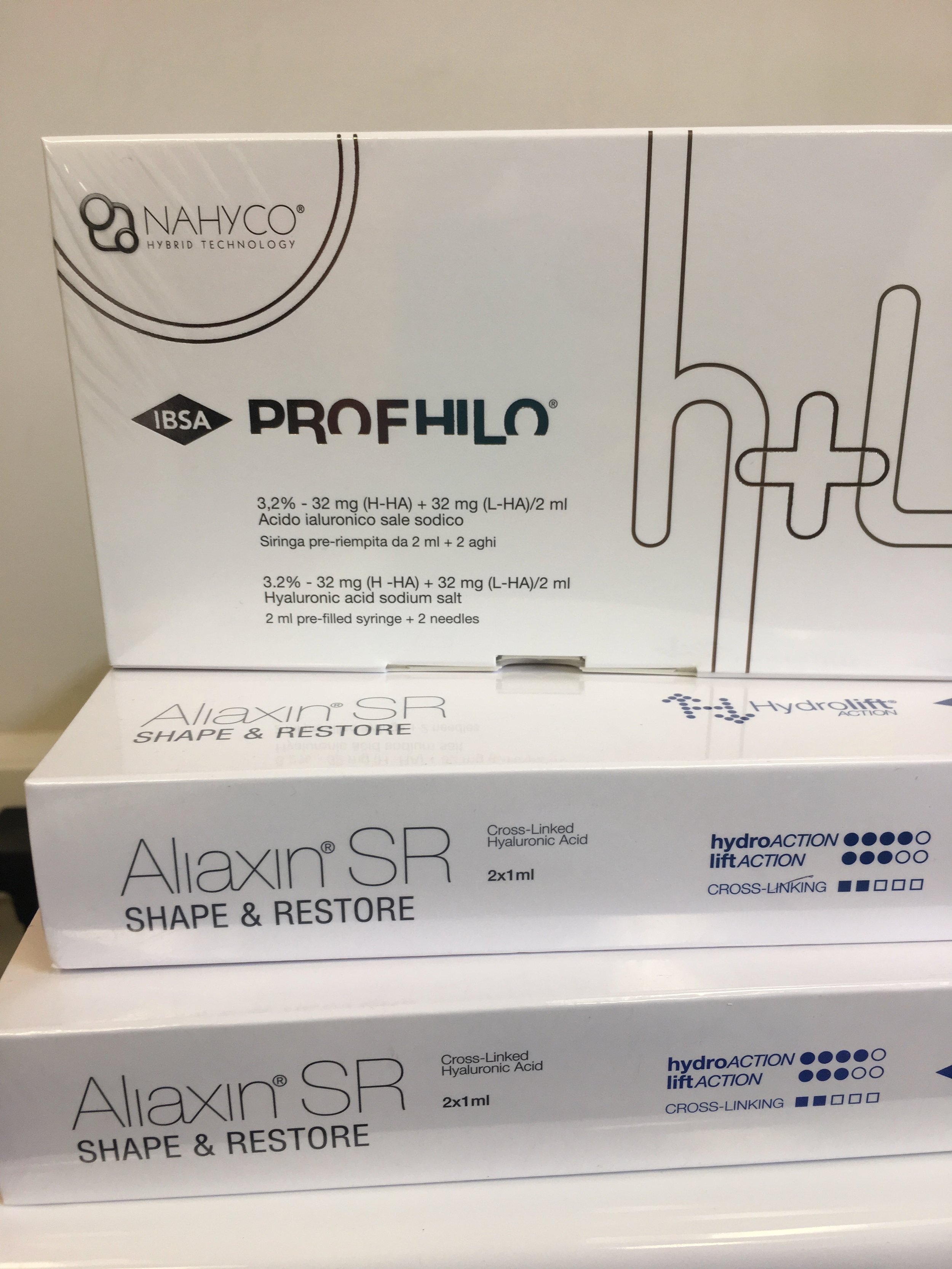 The products – Profhilo and Aliaxin Shape and Restore, that Dr Saira used in my neck

The Aliaxin jabs into the neck creases came first and weren’t exactly comfortable, I should have opted for the numbing cream I was offered, but I had waved it away in the interests of speed. It was uncomfortable (but not impossibly painful) and took about 15 minutes. The Profhilo injections took all of two minutes. Because the product is so runny, it is injected in five ‘blebs’ which puff up like little alien wasp-stings on either side of my neck. Over the next 24 hours, the product disperses itself under the skin to cover the whole neck. 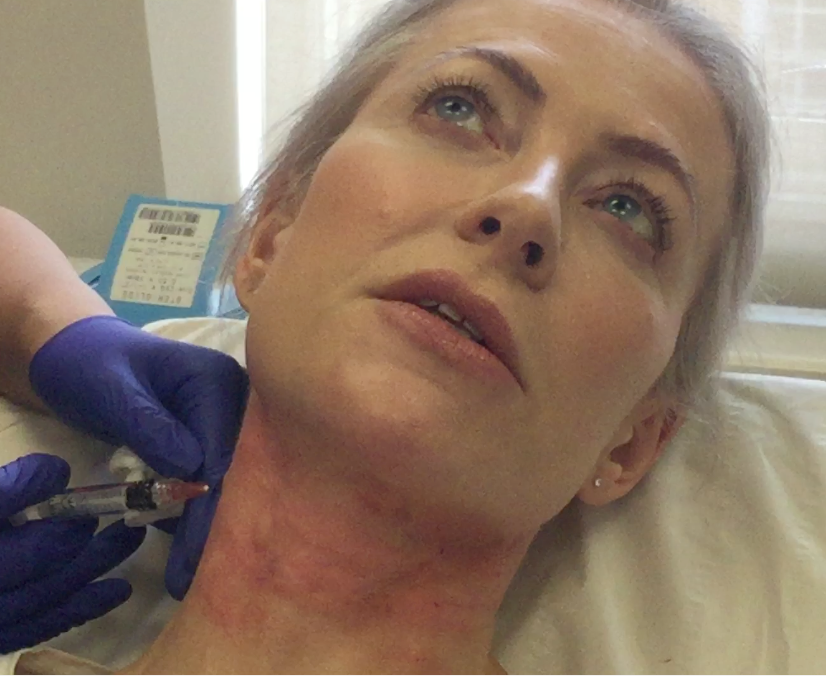 My neck looked rather the worse for wear afterwards – but nothing that a polo neck couldn’t hide. The swellings around the injection sites went down over the next 48 hours, There were a couple of bruises that hung around for a week. I went back after a month for a second round of injections – and then, a month later, started seeing results. Nothing dramatic, but a softening and smoothing of the skin surface, and a gradual strengthening of skin itself – when I roll it between thumb and forefinger, it’s a bit more resilient.

Profhilo (£875 for two treatments) and Aliaxin (£700 for 2ml)  or £1,450 together,  at the Waterhouse Young clinic in Devonshire Street, London (www.waterhouseyoung.com)

Video of the treatment below

There’s more chat about the treatment, and clips from the treatment itself, in the video here. Chat first, needles at the end, in case you prefer to skip that bit!

As the first needle eases its way into the thin but surprisingly resilient skin of my neck, I can’t help wincing. Ow!! It is NOT comfortable.

I had brushed away offers of anaesthetic cream, not wanting to keep everyone – photographer, make-up artist, Karen on video duty and Dr Saira Vasdev, who had her needles at the ready – waiting for another 20 minutes. Besides, I had tried a version of this same procedure in my face before, and it was so quick and easy that I hardly felt it.

But the neck is different, it seems. As Dr Saira continues undaunted with the first injection, I’m regretting my haste. I am all too aware of what is going on, and when a doctor is poking a very sharp needle into your neck, what with all the veins and windpipe and other crucial stuff that’s in there, you are well advised to hold very still.

I rattle through my list of tricks, honed by long practice, for how to breeze through uncomfortable procedures. There’s deep, noisy yoga breathing, which works nicely, but that tends to make other people think I’m in terrible pain and about to have a fit. There’s putting my mind somewhere else entirely, like on a beautiful beach at sunset, which is hugely relaxing but makes other people think I’ve spaced out and am going to faint. I settle for digging a thumbnail surreptitiously into the pad of my middle finger, which hurts so much it takes my mind off my neck, but keeps me in the here and now.

Why oh why have I decided that having a needle-based treatment on my neck is a brilliant idea? Well, the middle-aged neck is not a pretty thing. I don’t despair of mine in the way that the fabulous, late Nora Ephron did. She titled her 2006 book of essays, ‘I feel bad about my neck’, and her wit and wisdom struck a chord with millions.

But necks are a terrible giveaway of age. Even if you have looked after your face, you are unlikely to have paid such scrupulous attention to your neck and besides, the skin on your neck is different. It’s thinner, for a start, which means it  collapses more easily into wrinkles and folds, a process which is accelerated because of the way we twist and turn and stretch and compress our necks the whole time. It doesn’t have as many oil glands as the face to help keep it supple.

I have looked after my face properly – at least for the past 20 years since I started writing about skincare – and ever since dermatologist Dr Nick Lowe advised me, that whatever skincare and sunscreen I was using should be deployed from the hairline to the breastbone.

So I haven’t ignored my neck, yet it is certainly looking older than my face. The ‘necklace line’ creases where it folds are looking more entrenched with each passing year, and the surface has developed an unlovely crosshatch pattern which is a distinctly old-lady look.

To be sure, there are neck creams a-plenty. My favourite of these is the Prai Ageless Neck and Decolletage cream which even though it only costs £20 at Boots, manages to make any neck look smoother and fresher in just a week.

But creams only have a temporary, cosmetic effect on the surface. What I really wanted was something that would stimulate the skin to renew itself from the inside.

And the neck is a notoriously hard area to treat. ‘Just look at the anatomy,’ says Dr Saira. ‘In the face we have thicker skin, more bone, more fat pads. The skin on your neck is thinner, the bone – your spine – is towards the back and there is very little fatty tissue, so the architecture of the neck is much more vulnerable to ageing, and we haven’t really nailed it yet with treatments.’

There’s Botox, but that can only work to relax over-tight muscles in the neck, and which does nothing for the quality or firmness of the skin. Hence this new treatment which Dr Saira is giving me, which involves two sorts of injections, one to soften the more obvious lines on my neck, and the second to improve the quality of my skin.

The first is with a special type of filler from a brand called Aliaxin, which she is injecting into my necklace lines, the worst of the horizontal creases around my neck.

The type of Aliaxin that Dr Saira is using in my neck is called ‘Shape and Restore’ and why she has chosen this product is because it is very fluid and flexible, so it won’t look lumpy under the thin skin of my neck, and also because it can stimulate collagen growth in the skin in the areas where it is placed. This takes half a dozen injections along the lines, and I’m mightily relieved when they are done.

The second set of injections is the one I’m really looking forward to, and not just because I’m a masochist where these treatments are concerned. These are with a product called Profhilo which isn’t a filler, but a ‘bio-remodelling agent’, a substance that can stimulate the production of the body’s own elastin (which keeps skin springy), collagen (which keeps skin firm) and hyaluronic acid (which keeps skin hydrated) from beneath the skin’s surface, once it has been injected. That sounds like so much science fiction, but it has been proven to work in clinical trials which is why I’m keen to get this in my neck.

More elastin means tighter skin, and better hydrated skin means it will wrinkle more slowly, so it’s a preventative treatment for the future as well as a restorative one for now.

Profhilo is runny stuff, so runny that all Dr Saira has to do to get it into my skin is place five injections at strategic points on either side of my neck, whence it will disperse itself evenly beneath the surface of my skin. These injections sting a bit and swell up like insect bites. What with that and the Aliaxin injections, my neck looks a bit like I’ve had a run-in with a vampire, all red and blotchy and full of small holes, but nothing that a scarf can’t hide.

After all that, I’m delighted to get away with only one small bruise, which fades over a week, and those insect-bite swellings had gone down by the following evening. Then I wait.

A month later, I return to see Dr Saira. There’s no obvious change in my neck, but then this treatment doesn’t promise any improvements until a month after the second round of treatment. That’s because it is stimulating the growth of stronger new skin tissue and it takes two months for this to show up on the surface of the skin. She administers a second round of injections and off I go with my coat collar turned up to hide the evidence.

Over the next few weeks, I wait and wait to see improvements. When I tried this treatment in my face last year, I could tell by week five that it was working, because suddenly I hardly needed moisturiser. My neck is taking a lot longer to respond but by week 8, I am convinced there is a definite softening of those necklace wrinkles and I think – or could it be my imagination – that the skin is a tad tighter, too?

‘Can I have a feel?’ asks Dr Saira. She gentle plucks up the skin on my neck and rolls it between her fingers. ‘The quality of your skin has definitely improved, and so has that crepey texture. We weren’t trying to transform your neck but to improve the elasticity, smoothness and the neck lines as well, and it’s a preventative measure, too.’

The big question is, is it a £1,500-worth sort of improvement, even if it will last me a good six months? Not unless you’re in the habit of spending that sort of money on your face, clearly. But if you are, it could be a wise strategy – because there comes a point where a well-maintained face starts to look ridiculous when it is sitting on top of a neck which is clearly years older. Obviously, a roll-neck, a silk scarf and a good neck cream would cost a lot less. But if you’re into investment-injections, it could be just the thing for you. Just take my advice and don’t wave away the anaesthetic cream.