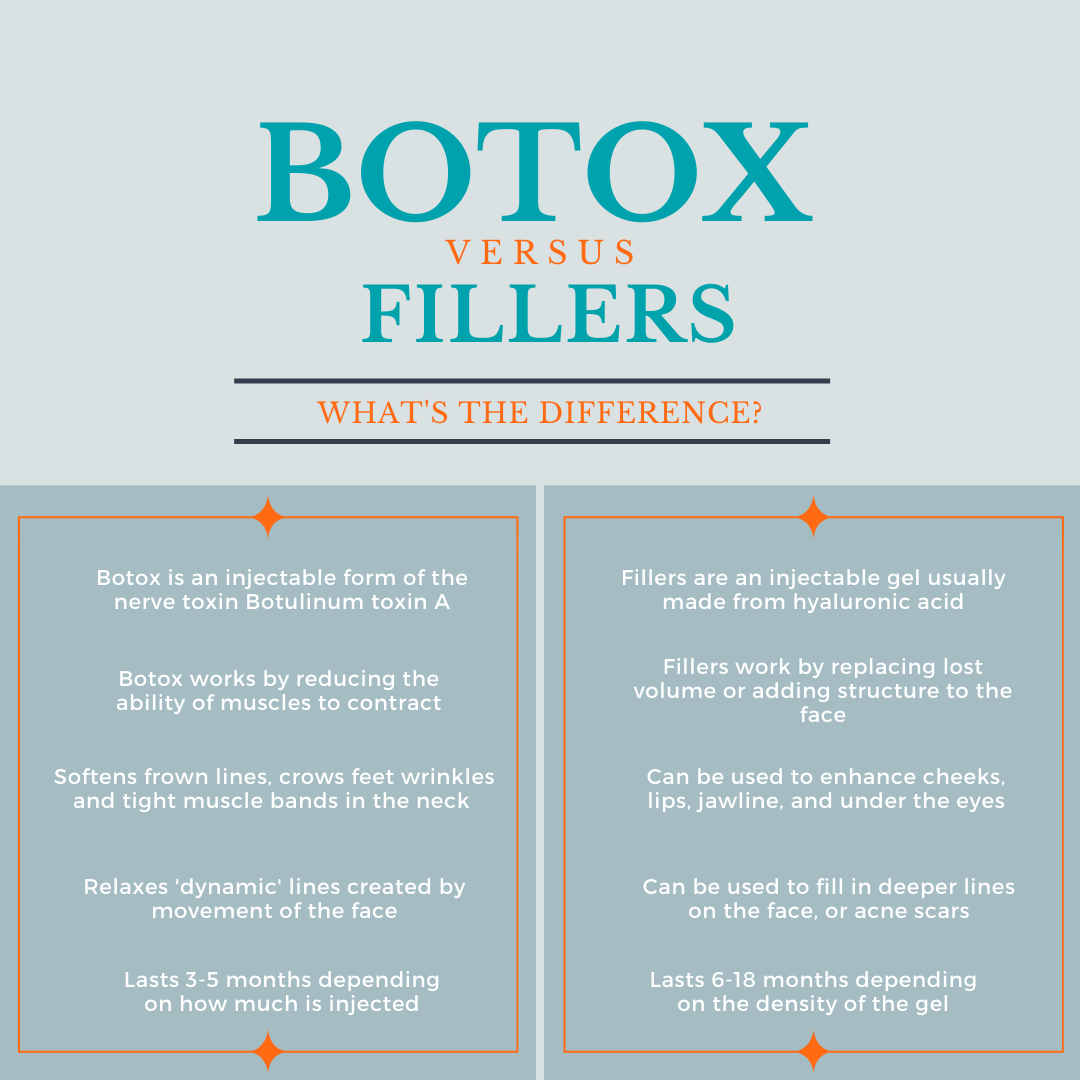 People often confuse Botox and filler injections as being the same kind of treatment. This couldn’t be further from the truth. Yes, they are both temporary tweakments which last for a number of months, and will make a difference to the way you look. But Botox and fillers are two completely different substances, injected into different parts of the face, to achieve completely different results. Although it’s not hard to confuse the two, as many people use the phrase ‘Botox and Fillers’ to describe non-surgical cosmetic treatments in general, while having both treatments done during one session.

Botox is a branded form of  botulinum toxin A. It is a prescription medicine and has become one of the best-known drug brand names in the world. Botox is an anti-wrinkle injection. It is a nerve toxin, which is injected into the muscles in different areas of the face, to reduce their ability to contract.

What are dermal fillers?

Fillers are gel-like substances, which are usually made from hyaluronic acid,

how does Botox work?

When Botox is injected into a muscle, it reduces the ability of that muscle to contract. It does this by blocking the receptor sites within the muscle that normally pick up signals from the nerves, which are telling them to contract. So the effect is that you can’t move the muscle as you normally would, and that stops, for instance, you being able to draw your eyebrows together to form frown lines. Not being able to create these frown lines with muscle movement, which many of us do by habit, many many times a day, softens the look of those lines.

how do dermal fillers work?

Dermal fillers add volume and structure to the face wherever they are injected. They need to be placed very precisely beneath the skin, or in the lips, to create the desired effect. Injecting filler beneath the angle of jaw can create a stronger-looking jawline. But if the filler is placed inexpertly in the wrong place, it will look really odd. For example, if filler is injected at the side of the point of the jaw, rather than underneath it, it will make the jaw look wider. That might look good on a male face, but it’s not such a good look for a woman.

Where is Botox used in the face?

Botox can be used in many different ways, most commonly:

Where are fillers used in the face?

Fillers can be injected wherever they are needed. Here are some of the most common places that practitioners choose to put them.

How long does Botox treatment take ?

Treatment is quick and takes about 10 minutes depending on how many areas  you are having treated.

How long does treatment with dermal fillers take?

Like Botox,  injections of dermal filler do not take long, depending on how much is being injected and to which areas of the face.  A small amount of volume in the cheeks, for example, may take 10 minutes. A full-face rejuvenation treatment may take up to an hour.

How long does Botox take to work?

After treatment, the results will begin to show within a week, and by 10-14 days you will see the full effects of the treatment.

How soon do you see results of dermal fillers treatment?

Unlike Botox, the effects of fillers are instant. You can see at once the difference that they make to your face, though there may also be some extra swelling, as a result of having the fillers injected, which will go down over the next day or two, so you will see the final, finished effect around 10 days after treatment. If for any reason you are unhappy with the results, fillers made from hyaluronic acid can be dissolved by your practitioner.

how long does botox last?

Botox will last anywhere between three and six months, depending on how much is used and the level of muscle activity in the area. If you only had a light dose, perhaps a treatment called a ‘microdose’ or ‘baby Botox’, then the results will be more subtle and will only last for a couple of months.

how long will injections of dermal filler last?

Fillers last between six and 18 months, and this varies depending on what kind of filler was used, as well as the amount injected and the rates of metabolism of the person who had them – some people break down filler a lot faster than others.