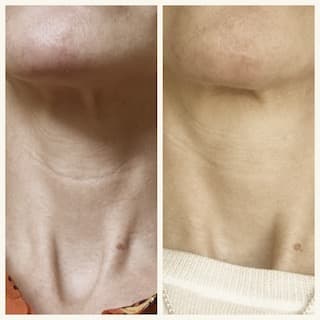 Softening neck wrinkles from the inside out sounds like science fiction, but that’s what I’ve had done here, with the latest ‘moisture jab’ injections. There’s hasn’t been much that you can do for a crepey neck – apart from

choose a good neck cream, or just cover it up — but now a new bunch of injectable, moisturising hyaluronic acid gel treatments is offering a whole new approach. This is a treatment I tried last year, and I would say the results lasted at least six months.

What are the ‘moisture jab’ injections?

There is Juvederm’s Volite, Restylane’s Skin Boosters  – and Profhilo, which I chose because you only need to have two rounds of five injections on either side of the neck. The other treatments require hundreds of tiny pinprick injections (the Juvederm one is a one-off treatment, but the Restylane one requires three rounds of treatment to get the full result).

Profhilo is also proven to boost not just skin hydration and elasticity but to fire up the production of collagen and elastin in the skin too, which means firmer skin after about eight weeks — it takes that long for the skin to remodel itself, especially if it’s on the mature side.

As you can see in the video (warning – there are needles) the treatment is quick. Here, I had a combination treatment with Aliaxin, a type of flexible dermal filler, which was injected along my neck-wrinkle lines, and then Profhilo injected around this. 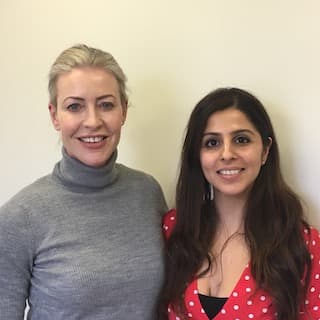 Dr Saira Vasdev did my treatment, at the Waterhouse Young clinic just off Harley Street, in London. The Profhilo is such a fluid product (rather than a gel) that it only needs to be injected into five spots on either side of my neck. From those injection points, it spread beneath the surface of the skin to cover the whole area. Once in place, the Profhilo attracts water to the area and begins the regenerative process that results in plumper, firmer skin after eight weeks.

My neck was quite red after the injections, and I had one or two bruises that lasted for a couple of weeks. 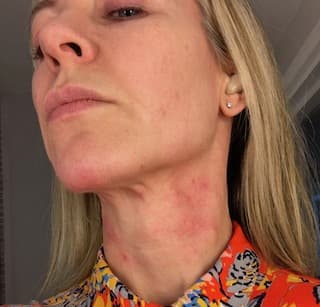 When I returned for a review, I could see that the necklace lines looked softer. Dr Vasdev took a pinch of skin between her fingers and showed me how it was less crepey than before, and it bounced back into shape much more quickly than it had done.

Altogether, I had two rounds of treatment with both Profhilo and Aliaxin, which adds up to almost £1,500.

Is it worth it? The Profhilo, definitely. The Aliaxin, I’m not so sure about. Especially because we tend to neglect our necks, with the result that our necks start to look much older than our faces. This is a clever way to start to redress that imbalance.

Profhilo and Aliaxin, £1,500 at the Waterhouse Young clinic.