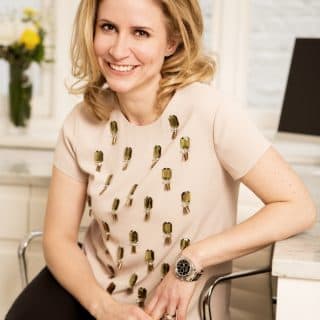 Widely praised as one of the UK’s ‘best face-perfecting doctors’ by the British press, Dr Vicky Dondos is highly regarded for her sophisticated application of Botox®, fillers and lasers. Beauty editor Sarah Vine perhaps summed up her appeal best with this quote in the Times: ‘I would defy anyone to spot her work – and yet it is not so subtle as to be ineffective.’

Dr Vicky Dondos is the co-founder Medicetics – an award-winning medical aesthetics clinic known for its subtle, freshening treatments – which she opened more than a decade ago with her husband cosmetic surgeon Mr Geoffrey Mullan.

Combining a mix of non-surgical treatments and prescription skin care, Dr Dondos’s aim is to help clients look fresh and rested, turning back the clock, while maintaining a totally natural-looking appearance.

‘You’ll look a little perkier and a little less tired – but no one will notice a thing. Not even your kids.’ That’s according to Tatler who have named Dr Dondos as one of Britain’s best Botox® doctors, in their Beauty and Cosmetic Surgery Guide.

Chatty, warm and friendly, Dr Dondos has an unsurpassed ability to put patients at their ease, with clients often remarking on her warm, down-to-earth manner and genuine sense of empathy.

A fully qualified, medical doctor, Dr Vicky Dondos graduated from Guys and St Thomas’s Medical School in London in 1998. She has been practising aesthetics for more than a decade and co-founded the award-winning, doctor-led aesthetics clinic Medicetics with her husband cosmetic surgeon Mr Geoffrey Mullan in 2006, with the aim of delivering safe and professional treatments.

Medicetics operates on the principle: “First, do no harm” based on the Hippocratic oath, this is the overriding principle of medical doctors the world over, which it underpins every treatment and every consultation at Medicetics.

Dr Vicky Dondos has been practising for 13 years and offers the following tweakments: