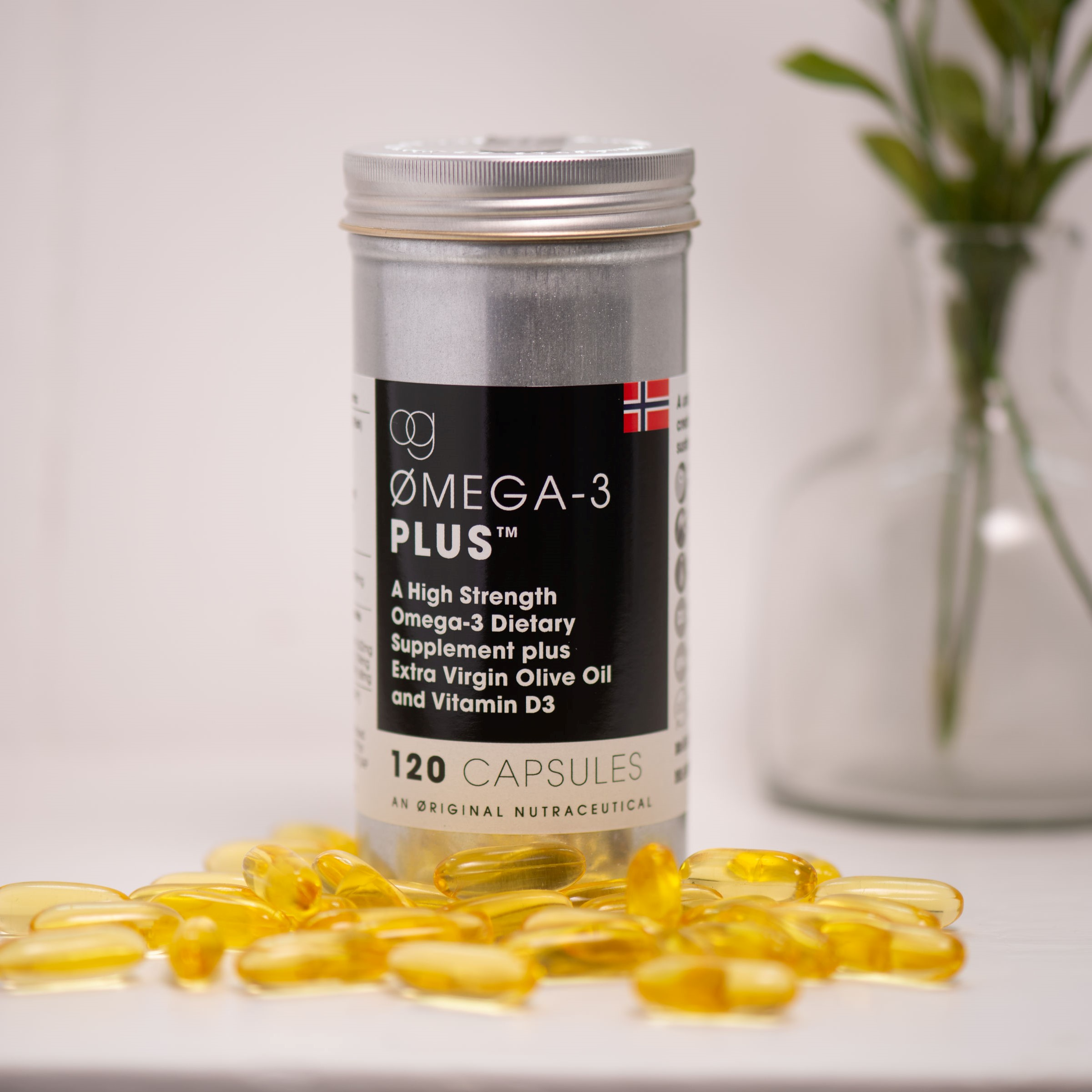 We know that omega-3 supplements such as fish oils offer a wide range of benefits –  but did you know just how great they are for our skin?

What are Essential Fatty Acids (EFAs)?

Omega-3 EFAs are beneficial polyunsaturated fats that we can only get from our diets because our bodies cannot produce them. The two mostly commonly known types are omega-6 and omega-3. And it’s omega-3 I am going to talk about here,  because we have more than enough omega-6 in our normal diets.

Omega-3 has been linked to having many health benefits including improving joint mobility, eyesight, brain and heart health (although there is some conflicting research when it comes to the latter). It has also recently been linked to having a positive impact during menopause by supporting mental health (helping with depression and anxiety) and even reducing night sweats.

But what is not so often talked about is the fact that omega-3 essential fatty acids are also vital for the health and good functioning of the skin. Why? Because they are a crucial part of the lipid (fatty) membrane that surrounds every cell in the body. When the skin-cell membranes are in good shape, they hold onto moisture more effectively, and so keep the skin softer.

How does omega-3 benefit the skin?

Claims about the benefits of omega-3 on the skin are wide ranging, including its effect on skin conditions such as acne, atopic dermatitis and psoriasis, as well as its impact on wound healing, hair and nail growth. There are even some studies showing its potential in the fight against skin cancer. Although more scientific studies need to be done to further prove some of the claims, I reckon omega-3 will become increasingly important in the world of skin health in the future. And here’s why…

There have already been a couple of studies to suggest that supplementing with DHA and EPA omega-3s in combination may reduce the skin’s sensitivity to ultraviolet light and therefore can protect it against the sun’s harmful and ageing ultraviolet A (UVA) and ultraviolet B (UVB) rays which means greater prevention against skin cancers. Not to the extent that you can use supplements instead of sunscreen, but if this research is further validated, then any added protection we can give our skin is  huge bonus.

There may also be beneficial effects for skin conditions such as psoriasis and atopic dermatitis because omega-3s as well as improving skin barrier function, sealing in moisture and keeping out irritants, omega-3s have an anti-inflammatory effect.  Some has suggested that this anti-inflammatory effect is why taking omega-3s can help reduce the severity of acne.

As I mentioned earlier, omega-3 helps hydrate the skin by ensuring the skin-cell membranes are in good shape, thereby making sure they hold onto moisture more effectively. This means they can also help with skin dryness by keeping the skin soft and hydrated. One study showed that women who consumed around half a teaspoon (2.5 ml) of omega-3-rich flaxseed oil daily experienced a 39% increase in skin hydration after 12 weeks. Their skin was also less rough and sensitive than that of those in a placebo group.

How do I get more omega-3 in my diet?

The quickest way to pack in omega-3 is to eat oily fish such as salmon, mackerel, herring, sardines and fresh tuna. Experts advise not to overdo it, however, because, although these types of fish are really good for us, they also tend to contain low levels of pollutants like mercury, which can then build up in the body (unless you are buying wild Alaskan salmon, but that’s super expensive).

Two portions a week is the amount usually suggested as being the maximum by health experts.

What fish gives you is two particular omega-3 fatty acids called docosahexaenoic acid (DHA) and eicosapentaenoic acid (EPA). There is a third plant-based omega-3 fatty acid called alpha-linolenic acid (ALA), which is found in walnuts, flaxseed oil, and chia seeds; such foods are worth adding into your diet for the omega-3 backup, as it were, but fish is a better source, unless you are vegan. That’s because, once you’ve eaten ALA, your body has to convert it into DHA and EPA, so it ends up being only about 10% as effective as the marine based omega-3s. This is why nutritionists are always going on about eating oily fish and why omega-3 supplements are such a good idea if you’re not a great fish-eater.

Should I take an omega-3 supplement?

So, can you make your skin softer and better hydrated simply by taking an omega-3 supplement? The answer is, yes, you probably can.

Supplementation can be really useful for a number of reasons. It is not always easy to tell if we are getting enough omega-3 from our diets and, as mentioned above, some people are worried about eating too much oily fish because of pollutants.

Depending on how old you are you may remember your gran or your mother even taking cod liver oil or being spoon-fed some of the fishy liquid yourself (many of us have unpleasant memories of that!) but fish oil supplements have come a long way since then.

When it comes to supplementation it is important to find a good quality and efficacious brand. In my hunt for the best omega-3 supplement, I came across a Norwegian brand called OG ØMEGA-3 PLUS.

What is OG ØMEGA-3 PLUS?

Based on more than 30 years of research, OG ØMEGA-3 PLUS is exciting for a number of reasons. Firstly, we all care more about sustainability these days and, as I said, the worry with fish oil is often the risk of heavy metal pollutants. OG is made from high quality North Atlantic Herring oil, which is produced at its world leading facility in Norway, and caught in the sea locally.

North Atlantic Herring is an oily fish with more omega-3s than salmon. As well as the omega-3 fatty acids it also contains a very special long-chain mono-unsaturated fatty acid – euric acid, which has powerful anti-inflammatory properties and has been shown to have a significant effect in preventing atherosclerosis in laboratory testing.

Each batch is independently tested to ensure that there are no heavy metals and that the oil has not oxidised.

Another reason the way it is sourced is important is that omega-3 oils are susceptible to oxidation as the natural antioxidants within the fish oil are destroyed during the production process. To counter this and to provide the best natural antioxidant OG has added cold pressed extra virgin olive oil into the mix. This provides powerful antioxidants (polyphenols) which help prevent inflammation and guard against oxidation of the omega-3s before and after consumption.

A daily dosage of ØMEGA-3 PLUS provides your recommended amount of three important omega-3 fatty acids, DHA, EPA and DPA. They have also added vitamin D3 which supports your bones, teeth, muscles and immune system.

OG supplements are now available in the shop on this site, £40 for a month’s supply