LED red light therapy is a treatment for improving skin texture and softening lines and wrinkles using light from LED bulbs. Treatment with red light involves nothing more taxing than relaxing for around 20 minutes in the gentle glow from a large canopy studded with small LED bulbs, or wearing a phantom-of- the-opera–style face-shaped mask which has LED bulbs on the inside. Scroll down for all the FAQs about LED red light therapy. 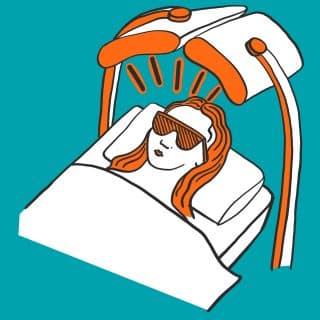 What is LED red light therapy?

LED red light therapy is a treatment for improving skin texture and softening lines and wrinkles using light from LED bulbs. Treatment with red light involves nothing more taxing than relaxing for around 20 minutes in the gentle glow from a large canopy studded with small LED bulbs, or wearing a phantom-of-the-opera–style face-shaped mask which has LED bulbs on the inside.

You can have LED red light therapy either as a standalone treatment or as a component of a multipart treatment.

It feels like nothing is happening. It might even be a touch boring. The first time I tried it, years ago, I thought I was having my leg pulled. Seriously, how could this be good for my skin? But that was before I learned about the remarkable body of research that has piled up in favour of ‘photobiomodulation’, as light therapy is more properly called.

Yes, LED red light therapy is effective. It is increasingly popular with cosmetic doctors as well as in beauty salons.

LED light therapy – with any of the colours of light used – is also the only treatment I can think of that defies the usual maxim of ‘no pain, no gain’ which applies to most tweakments.

Up to a point. LED red light therapy will help to soften the appearance of frown lines because of the way it helps to regenerate the skin from within and create plumper, firmer skin. But frown lines are formed by the expressions your face makes, so unless you train yourself to stop making those expressions, or have injections of toxins or other wrinkle-relaxing injections to damp down the action of the muscles that pull the face into frown lines, it won’t get rid of them.

What does LED red light therapy do?

The red light has a healing effect on the skin and promotes the growth of collagen. This is one of the gentlest ways of persuading your fibroblasts to produce more collagen, which makes it understandably popular.

Here’s a more detailed explanation from Dr Ravi Jain, who runs the Riverbanks clinic in Harpenden and who has been using LED light therapy on patients for more than 12 years:

‘What red light therapy does is trick the body into thinking that there has been a wound in the skin. Then the skin releases growth factors and stimulates collagen growth, which is what the body does when it needs to repair the skin, so you get younger-looking skin.’

‘What makes it so good for improving skin texture is that, when you have newer, healthier skin cells being produced, they can do their job more efficiently. They absorb fluid and hold onto it better than old, damaged cells, so they are fuller, which plumps up the skin, makes it feel smoother and reflect light better. That’s why periorbital rhytids (aka crow’s feet wrinkles around the eye) improve dramatically with red light therapy.’

Where can I get LED red light therapy?

Most cosmetic clinics and many beauty salons now offer light treatments. The most common is red light treatment, and they will usually offer separate sessions of this, as well as tacking it onto the end of other treatments where it is helpful for calming down any inflammation in the skin generated by previous parts of the treatment, and for stimulating skin renewal.

You can use the Find a Practitioner tool on this website to find a practitioner for LED red light therapy.

Alternatively, get a home-use device that will give you LED red light therapy when you want it.

The strength of the light from home-use LED red light therapy masks depends on the number of bulbs, and the quality of the bulbs, that the mask contains. The Light Salon, which offers in-salon treatment and also a home-use mask, say that the salon treatment is much stronger, but that the home-use mask also gives you a decent dose. ‘With LED the more you do the more you gain,’ says a Light Salon spokesperson, ‘so think of it in the same way that you might think of exercise. The Salon is like an intense session with your personal trainer, the mask is like your gym membership. Both options are great, it just depends on what suits you, your budget and your lifestyle.’

How much does LED red light therapy cost?

A session of LED red light therapy on its own costs around £30 to £50, depending on the clinic. You will normally need to have a course of sessions.

Many clinics offer red light therapy as one component of more complex treatments.

A typical LED red light therapy session takes around 20 minutes. Most practitioners recommend that you have two or three sessions a week for several weeks.

A typical regime of LED red light therapy would be one 20-minute session three times a week.

If you find LED red light therapy beneficial, get a home-use LED device that you can use on a schedule that suits you.

Are there any side effects to LED red light therapy?

Not really – LED red light therapy is considered not only safe but also painless.

There is also a remote chance of getting burns from a red-light unit. However, this normally happens only if the patient falls asleep during a home-use session and continues the therapy too long. Most home-use devices switch off after a 10- or 20-minute session, so this risk is very remote.