People tend to like their noses pretty straight and symmetrical with no lumps, bumps and kinks.  Truth be told, very few noses naturally fit this aesthetic, however, it’s the standard against which most people measure their own noses. When we look in the mirror we can often see imperfections that throw off the balance or general aesthetic of our nose. These bumps are often imperceptible to others, but can often be a source of concern. It may give your nose a hooked appearance or make it look a little zig-zagged—whatever it is, the nose of one of the things we see the most often in the mirror, so it’s somewhere we tend to notice minor imperfections. Scroll down for answers to all the FAQs about uneven bridges. 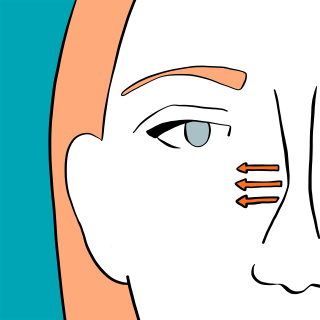 FIND A TREATMENT FOR Uneven Bridge

What is an uneven bridge?

When most people talk about the ‘bridge’ of the nose, they’re usually referring to the length of the nose if you look at it front-on. In medical terms, that’s actually called the dorsum, with the bridge technically just referring to the bit between your eyes. On this page, I’ll talk about the bridge as it’s come to be used in modern parlance—the length of the nose front-on. But it’s worth being aware of the distinction before you go to consult a practitioner.

That covered, what exactly is an uneven bridge? Well, people tend to like their noses pretty straight and symmetrical when viewed from the front, and running in a straight flat line from between the eyes to the tip when viewed in profile. Truth be told, very few noses naturally fit this aesthetic. However, it’s the standard against which most people will measure their own noses, so they will often see bumps or kinks which throw off the balance or general aesthetic of their nose. These bumps are often imperceptible to others, but can often be a source of concern for the patient. It may be a bump that lends the nose a hooked appearance or a kink on one side that makes the nose look a little zig-zagged—whatever it is, the nose of one of the things we see the most often in the mirror, so it’s somewhere we tend to notice minor imperfections.

Why is my nose bridge uneven?

Broadly speaking, there are three reasons your nose might not be perfectly straight:

How do you straighten your nose?

There are two options:

What does non-surgical rhinoplasty involve?

The first option, non-surgical rhinoplasty, can be extremely effective at treating hooked noses and drooping nose tips. The only thing to be aware of is that you are always going to be adding volume to the nose, so if it’s a smaller nose you want then you should carefully discuss your options with a practitioner who is familiar with both the non-surgical and surgical options.

You’d be surprised at how much a change to your nose can change the look of your entire face, so I always think that non-surgical rhinoplasty—if it’s right for you—is a good place to start, as it will give you a preview of what surgery could do for you without committing to a permanent change you might regret. Also, many well-known nose surgeons, including several on the practitioner list on my website, now also offer non-surgical nose adjustment, so you can have a full consultation with them about all the different options and work out which might suit you best. These surgeons say that many people want to try a non-surgical nose job before perhaps moving on to having a surgical rhinoplasty.

How to make your nose straight naturally?

Unfortunately, you can’t straighten your nose without some form of medical intervention. You can, however, make it look straighter through the clever use of contouring and make-up. There are some impressive tutorials on YouTube that show how you can use make-up to play with light and shadow, accentuating or drawing the eye away from certain areas of the face, including the finer structures of the nose.

Can I use fillers to even out the bridge of my nose?

Yes, absolutely. Dermal fillers are often used to provide balance to an uneven bridge. Visit my page on non-surgical rhinoplasty for in-depth information about the procedure.

Where should I get my nose job done?

You want to find a skilled practitioner. Changes to your nose can affect your entire look, so make sure you find someone who really knows what they’re doing, ideally with a lot of experience behind them.

This is true of both surgical and non-surgical rhinoplasty. In the former, the change is going to be permanent, so you really need to know you’re in good hands. With the latter, the result is temporary (around a couple of years, depending on the filler used), but there’s a worrying lack of regulation in the industry which means that pretty much anyone can go on a two-day course, buy cut-price fillers (which aren’t regulated either) online, then hold themselves out as a practitioner. This is one of the main reasons I set up this site with its register of skilled and experienced practitioner you can trust. Also, as above, noses are tricky areas to work on, and you are strongly advised to find a surgeon experienced in surgical rhinoplasty for non-surgical nose work.

Can you remove excess cartilage from the nose?

Yes, you can do this with surgery. Just make sure to have a thorough consultation with a skilled and experienced surgeon to ensure that the ‘excess’ cartilage is actually excess and that removing it won’t have any adverse consequences.

Can nose cartilage be straightened?

If you’re looking to straighten out cartilage, you could consider the non-surgical option, which will make cartilage appear straighter, or you can go the surgical route.

How much does surgery to straighten your nose cost?

Non-surgical rhinoplasty costs from about £500, depending on the extent of the work being done. Plastic surgery will cost thousands of pounds.