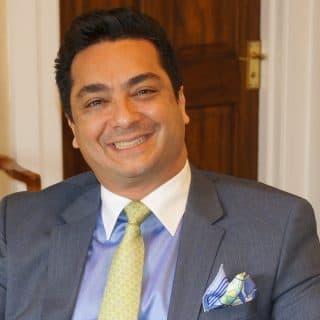 Mr Ayham Al-Ayoubi received his MD in 1990 and is now an ENT Surgeon at The Royal Free London NHS Foundation Trust, Chase Farm Hospital, London. Mr Ayham Al-Ayoubi specialises in facial plastic surgery, facial reconstruction and neck surgery. He is well-versed in non-surgical cosmetic and laser procedures, including Sculptra which he pioneered in the UK, and he has developed his own advanced techniques including Sculptra for facial asymmetry, deep acne and traumatic scarring and scar-free face lifting. Mr Al-Ayoubi was the first facial plastic surgeon to introduce the thread lift into the UK in 2003. He also pioneered Silhouette Soft – suture lift in the UK. Mr Al-Ayoubi also introduced BodyTite to the UK in 2009 and was the first leading laser surgeon to introduce Cellulaze laser for permanent cellulite reduction into the UK in 2010.

Mr Al-Ayoubi has been invited to many national and international conferences and congresses to deliver expert lectures. He is credited with bringing the latest laser technology and laser surgical techniques to a number of countries around the world. His patients travel from all over the UK and around the world to have Mr Al-Ayoubi perform laser body sculpting treatment. Mr Al-Ayoubi ensures that his patients are well-versed in every step of their treatment from the consultation to completion, and the impressive nature of his work speaks volumes to his ability.

Mr Ayham Al-Ayoubi has been practising for 29 years and offers the following tweakments: