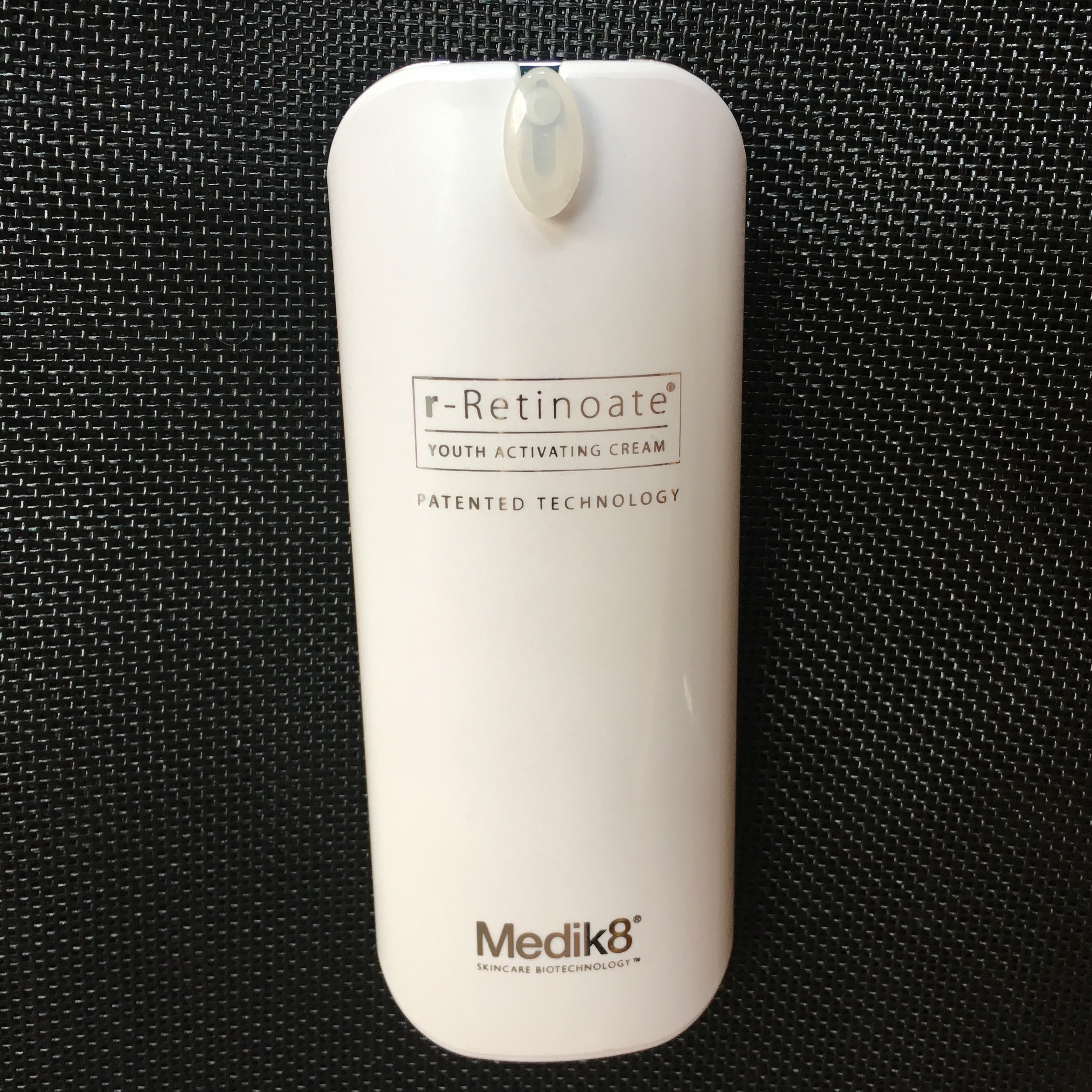 A game-changing product: r-Retinoate, from Medik8

Last year I wrote about this product, more than a bit too soon as there were production delays but the good news is that it will very soon be available, in October. What’s so great about it? It’s a highly effective skin-reviving cream (I am beginning to hate the phrase ‘anti-ageing’) and it should suit everyone – and no, this is not a sponsored post, it’s just an enthusiastic report about a very impressive new product.   Why am I so enthusiastic? Here goes:

It’s like retinol, but not as we know it

You may know about retinol, a skincare ingredient derived from vitamin A, with well-proven credentials for improving the skin. This new product contains a similar ingredient which is up to eight times more effective at softening wrinkles and helping the skin repair itself, yet is gentle enough to use every day – and is available without prescription.

It’s a light ‘cream serum’ from Medik8, a skincare biotechnology company based in the UK. The company already has a strong range of ‘professional’ skincare – the sort of products that contain really effective ingredients and are available in cosmetic clinics  — but even for them, this is a step up.

What’s so different about it?

The key ingredient is r-Retinoate which, like retinol, is derived from vitamin A.  But unlike retinol, it doesn’t irritate the skin. This is a big plus as the key thing that puts people off using retinol (and its prescription-strength cousins containing the even more potent retinoic acid) is that its efficacy is directly linked to its irritancy – i.e., the better it works, the more it will make your skin dry, red and itchy. If you’ve tried retinol, you will know how you have to acclimatise yourself slowly to the stuff, using a tiny amount twice a week until your skin can tolerate it. So a product with better effects and less irritation sounds a winner. 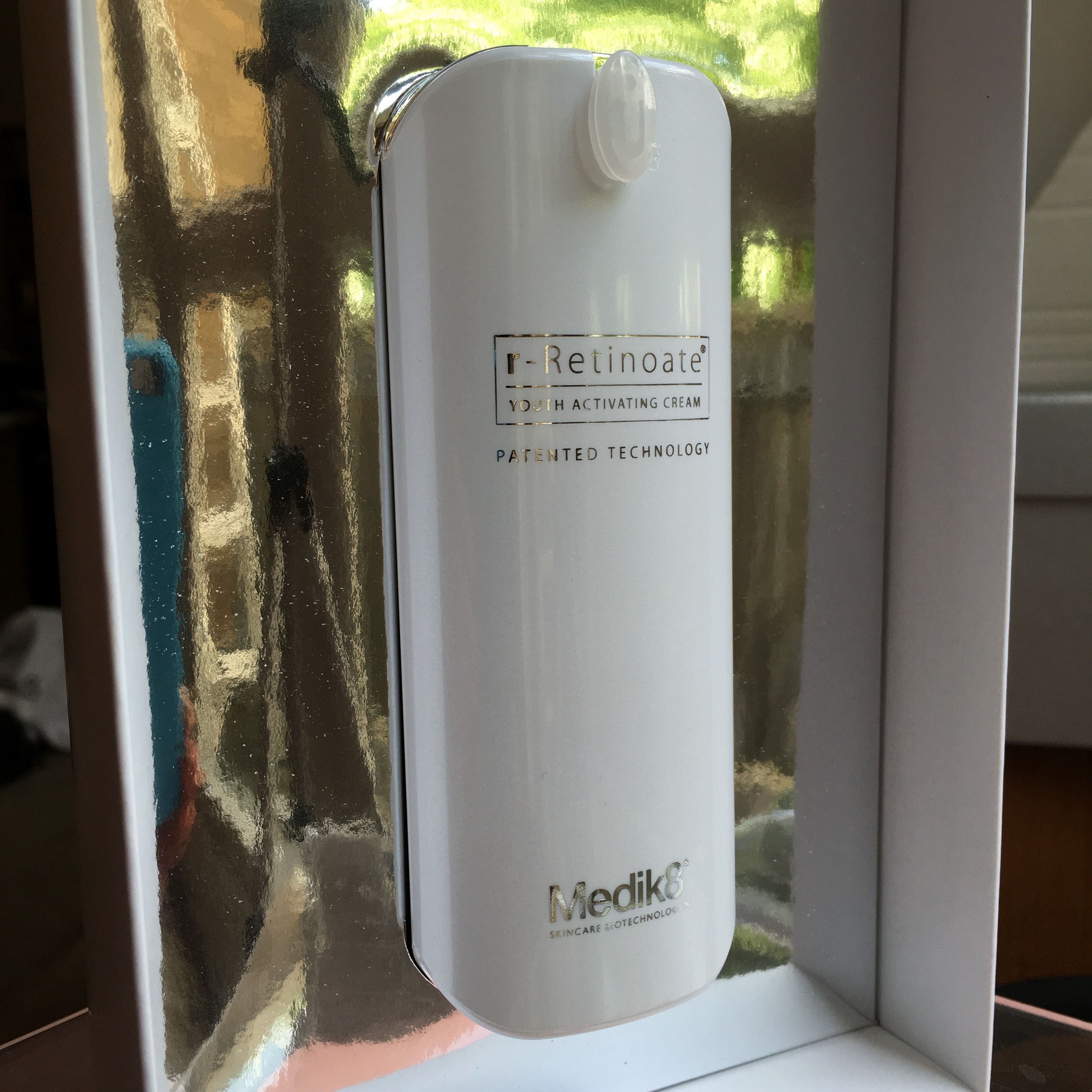 Don’t be distracted by the flashy packaging, this is serious stuff: r-Retinoate

Medik8 has worked with a Korean super-lab to produce an ‘encapsulated’ form of r-retinoate which goes to work directly on the nucleii of skin cells (in brief, that means it works faster than retinol, which has to be converted within the skin into retinoic acid, before it starts to work its magic). Also, unlike other vitamin-A products, this new ingredient doesn’t break down in daylight, so you can use the product morning and night.

How good are the results?

Remarkably good. When tested on wrinkles around the eyes, it proved significantly more effective  (in a double-blind clinical trial) than the high-strength retinol that it was tested against. It also produced better results than the retinol reducing signs of sun-damage on the skin. Another nice detail – in most studies, there are a few unfortunate people who just don’t respond even to the most magical of new anti-ageing ingredients, but not here – the r-retinoate gave measurable improvements to every single person who tried it.

How does it do this?

Like other vitamin-A-derived ingredients, it firms up skin by increasing the production of collagen, it increases the rate of turnover over the skin cells, so that fresher skin comes to the surface, and it also slows down the rate at which collagen breaks down in the skin.

Do you really want your skin cells to turn over faster?

Mostly, yes, we do, because the rate-of-turnover of skin cells slows down as we get older, and fresher smoother skin cells look better than scuffy old dead ones. The one thing you don’t want is the sort of rapid proliferation of skin cells that is associated with cancer but that doesn’t seem to be an issue here  —  previous studies on retinol have shown that it slows down cell turnover in cells that are over-proliferating.

Doesn’t it thin the skin?

Really nice. You put it on like any other serum… I found it spreads well, sinks in evenly, smells of almost nothing and makes a good base for make-up. I used it twice a day and managed to do so without any irritation, which was terrific; normally, I’m a bit of a wimp when it comes to retinoids and my skin can barely cope with regular use of 0.5% retinol. And, yes, my skin looked great on it.

Anything wrong with it?

If you ask me, just the name. During the final-testing phase, the product was called Retin-8, which is a great name. r-Retinoate is a big of a mouthful, though I suppose it sounds more scientific.

Medik8 r-Retinoate Youth Activating Cream will be on sale in October for £135 for 50ml, through www.medik8.com